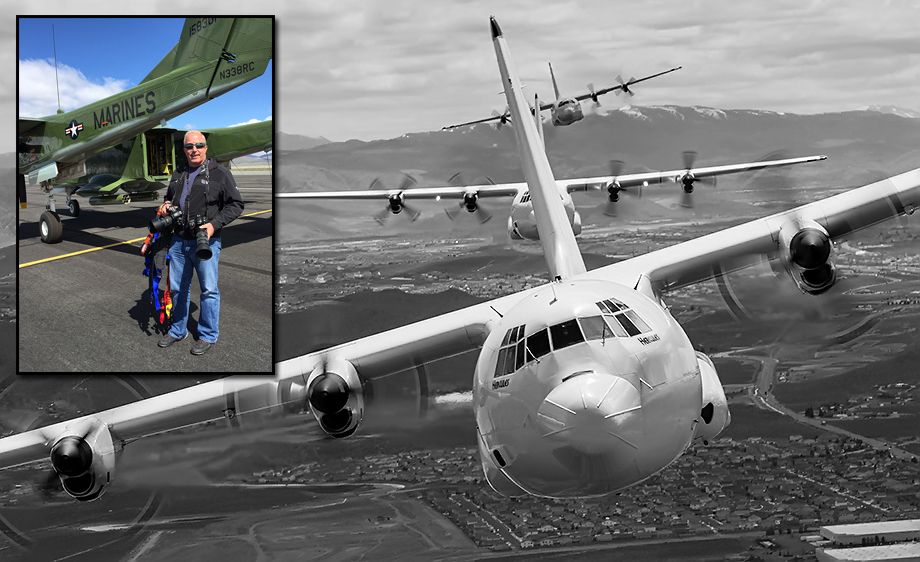 As a photographer, it's my job to listen to a client's needs and develop a plan for successfully producing their concept. In this case the client, Coulson Aviation, operates three C-130 Hercules as firefighting air tankers. The aircraft were scheduled to be in Reno NV for training before the start of fire season. The client wanted me to photograph all three aircraft in flight, and specifically, in formation from a head on perspective.

I recognized this was gonna a bit of challenge for several reasons. First, 'Hercs' are big, each with a wingspan of over 132 feet! They're also fast, cruising at 180 to 200 knots. So, between the 'Hercs' massive size and the cruising speed, and the requirement I capture images from a head-on perspective, I knew was going to need a specialized aircraft as my camera platform.

I reached out to a couple fellow aviation photographers seeking suggestions on an appropriate aircraft. I was told of an OV-10 Bronco operated by the Cactus Air Force, a flying museum located nearby in Carson City.

The Bronco is a versatile Vietnam-era light attack and observation turbo-prop and has a couple unconventional design features making it ideal for photography. Behind the pilot station in the main fuselage is a small 'cargo' compartment configured with a rear tail cone which can be removed for flight. It also has twin tail booms connected by a horizontal stabilizer arranged as a high t-tail providing a nearly unobstructed rear view from the airplane. In Vietnam, small squads of paratroopers could be lined up inside. Once on target, they'd slide out on their butts and deploy their chutes. This day, those design characteristics together with the Bronco's performance capabilities, would make it well suited for this particular mission.

After a couple weeks of coordination, everyone came together early one morning at the Reno Stead Airport. The three Hercs were already on the ground when the OV-10 flew in, landed, taxied up and shut down. After a round of introduction, the pilot, Eric Huppert, began a brief with me as to how I would be secured into and photograph from the Bronco.

I was to be in a full body harness and tethered to a hard point in the aircraft. During take off I was to be seated and seat belted in a small rear facing seat at central portion of the nacelle. But once airborne, I'd unbuckle from the seat and slide on my butt across the cabin floor, (+/-5 feet), to the rear edge of the small compartment. There I would sit 'Indian style' with my crossed legs being held down to the floor by a large belt and staring out into space from a (roughly) 30" x 45" opening. Oh, and I was cautioned to make sure my foot never slipped out of the opening. Apparently, the airflow at 200 knots will suck shoes right off. Good to know, right?!

During the brief, some of the Herc crew members and a film crew from the Discovery Channel listened in, some exchanging 'he's plain nuts' looks between one another. But I think any of them probably would have traded places with me.

Anyway, after a thorough briefing with everyone involved, we were ready to launch. Once airborne, we flew to a designated training area north east of Reno where the Hercs performed individual water and retardant drops. After, they joined up together and tucked in behind the OV-10 where they arranged themselves into different formations for the camera. It was bumpy and pretty darn cold, but wow, what a view!

We shot for about two hours, mostly over the emerald green waters of Pyramid Lake. After concluding our formal formation shots, we headed back to the airport and the Hercs 'relaxed' into a somewhat loose trail directly behind the OV-10. This frame, as the Hercs are initiating their turn to the airport, might be my favorite from the day, providing a powerful 'in your face' head-on perspective that my client was seeking.