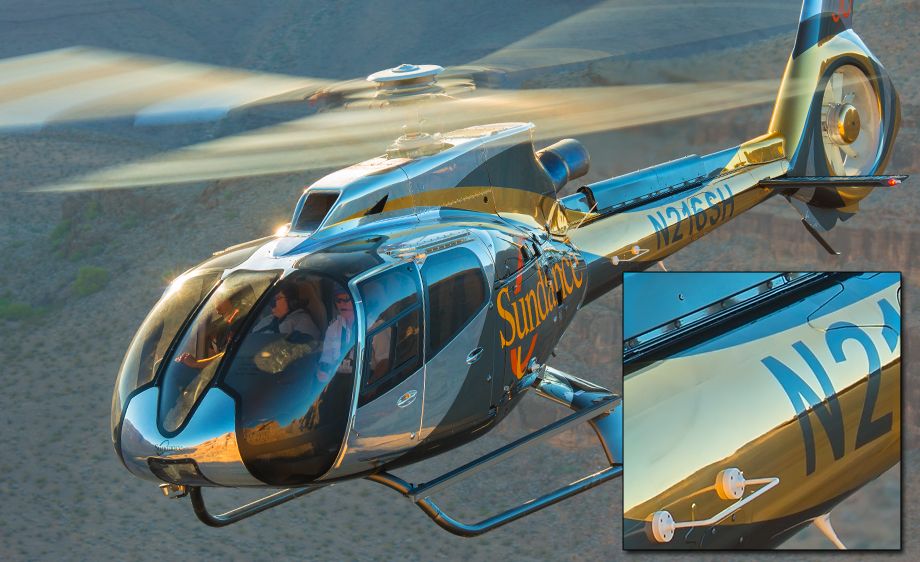 Every now and then when I'm on a project the stars align and I'm presented an opportunity to capture some really special images. This project a couple years back with Las Vegas NV based Sundance Helicopters was one such occasion.

The operator, which provides helicopter tours of Las Vegas and the Grand Canyon, was having a grand reopening. They had recently undergone a company wide re-branding that included a fantastic, completely remodeled customer reception facility and the introduction of new aircraft.

The first of what would eventually be over 20 Airbus EC-130s to be operated by Sundance had created quite a stir in the industry. It had been finished in an innovative gold and silver chrome exterior finish that contained over seven ounces of real silver. This was a proprietary finish developed specifically for this application to enhance the visual impact of the aircraft in the colorful Las Vegas and Grand Canyon environments.

I was to spend two days with the operator. The first day I spent meeting folks, conducting interviews and shooting photos around the the new facility and a glitzy evening grand re opening party. At the end of the day they asked what I would like to do the next day.

Well, when anyone makes that kind of offer, especially with this kind of beautiful and unique aircraft, I'll ask for the world and take what they offer. So I asked that we do an early morning air to air shoot and catch some pretty morning light on the aircraft. Nobody batted an eye. They responded, 'sure, what time ya wanna launch and where do ya wanna go?' So we decided to meet before dawn, get into the air and be dropping into the Grand Canyon at dawn!

The next morning we were airborne just as the sun was beginning to brighten up the eastern sky. I enjoyed the ride from the rear cabin of an Astar with the doors pinned open.

Forty or so minutes later we were entering the Grand Canyon just as the sun was popping over the horizon. The air was soft and smooth as the sun slowly climbed in the sky and the colors of the canyon walls and the EC-130's two tone exterior finish began to shimmer.

Granted, shooting like this, even with the camera mounted to a gyro, can be a low percentage proposition. But I was pretty confident I was going to be able to nail the epitome of what I refer to as an "in-flight beauty shot.' The background was super clean and the side lighting bouncing off the near canyon walls and reflecting off the EC-130's finish was absolutely amazing. In this instance, the stars did align!

To capture it I used a handheld D800 camera with a Nikkor 70-200 f2.8 VR II w/ circular polarizer at a shutter of 1/40 which rendered the spinning rotors as a soft, glowing blur. Even when viewed at 100%, the aircraft is absolutely tack sharp and beautifully 'pops' from the shadowed background. It's one of my most favorite images from the project. When the story ran, Vertical magazine, (Oct/Nov 2014), chose a similar image for the cover of issue.